The story of mountaineering begins in Europe in the mid-1800s. At the time young men were taking to the mountains and photographing themselves climbing. They, in turn, would sell the images to tourists. Their actions helped promote climbing as an activity. That idea soon spread to the United States and took hold in the corners of the country where mountains were present. In twenty years all the leading US alpine clubs were founded. The first was the Appalachian Mountain Club in 1876, followed by the Sierra Club in 1892. The Mazamas came next in 1894 when William G. Steel organized and founded the Mazamas on the summit of Mount Hood. The American Alpine Club followed in 1902. While not Steel's first attempt at a mountaineering organization, the Mazamas has endured and continues to live up to the standards set by the organization's founders. Several of those founding members are worth noting. 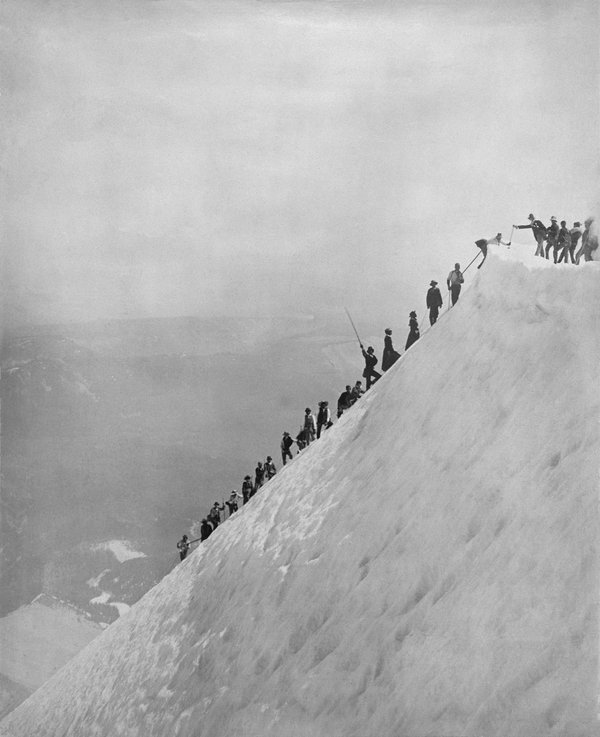 The Mazamas and its members were among the early leaders of Oregon, and they figure prominently in the epic story of the state. William Gladstone Steel, a no-nonsense postman, was the driving force behind the Mazamas. Steel wanted to establish a climbing organization run by climbers for climbers. He was adamant that summiting a glaciated peak be a requirement for membership, a threshold that remains today. As if founding a new organization was not enough, Steel was also advocating for the creation of Crater Lake National Park. His seventeen years of work paid off when President Theodore Roosevelt signed the Park into law. Steel would serve as the Park’s second superintendent. The Steel Cliffs on Mount Hood are one of the many places named for the Mazamas founder. Several other founding members include Henry Pittock, publisher of the Oregonian newspaper whose mansion overlooks the city of Portland. Rodney Glisan, his family is the namesake of one Portland’s principal thoroughfares. And L.L. Hawkins, founder of the Free City Museum, the forerunner to the Oregon Museum of Science and Industry, OMSI. 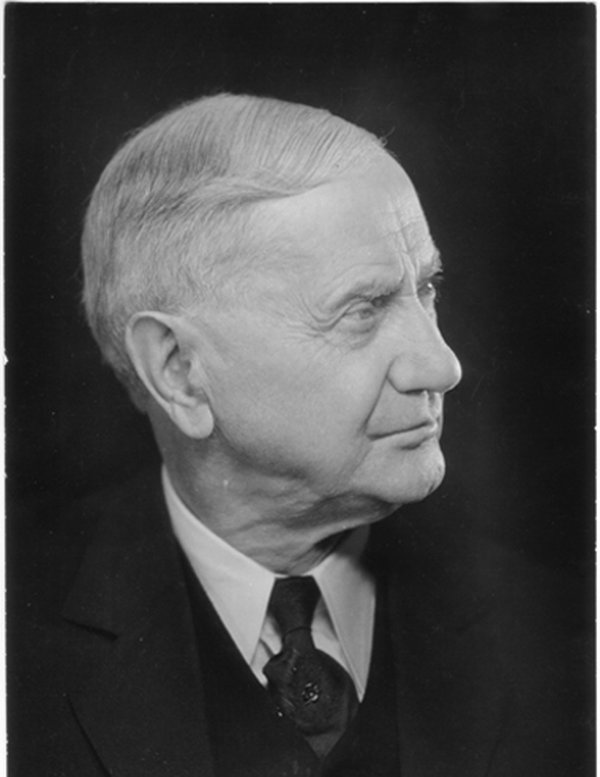 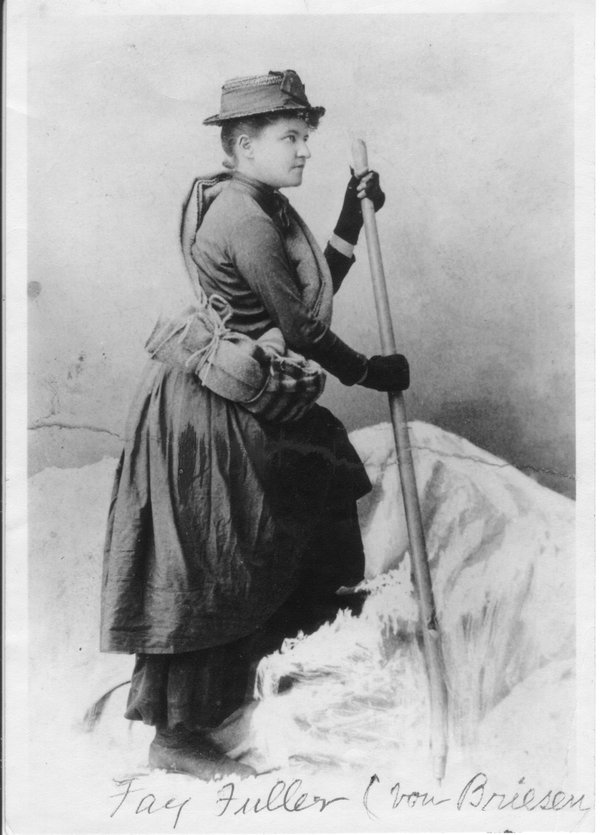 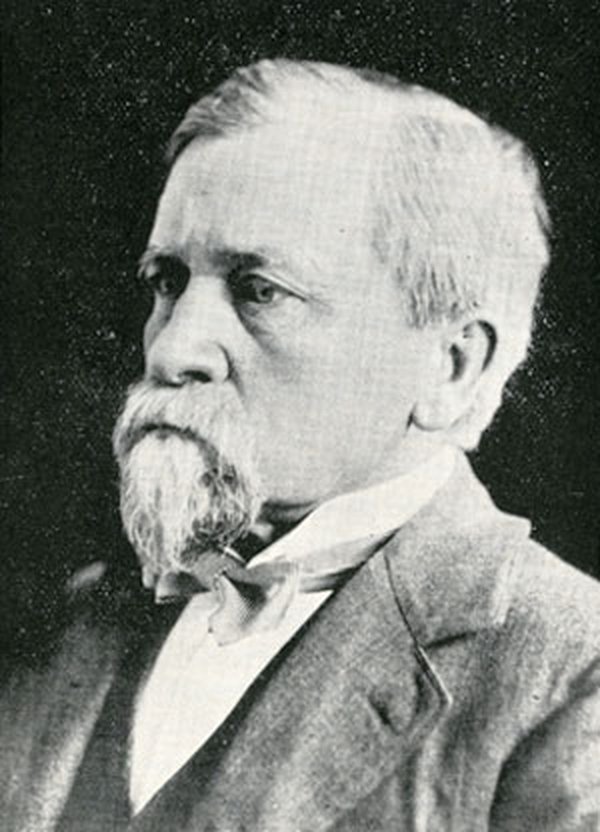 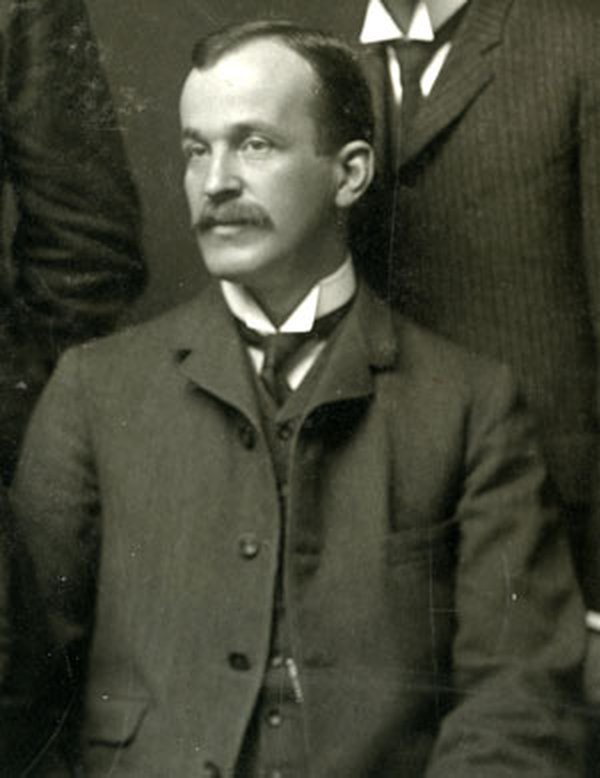 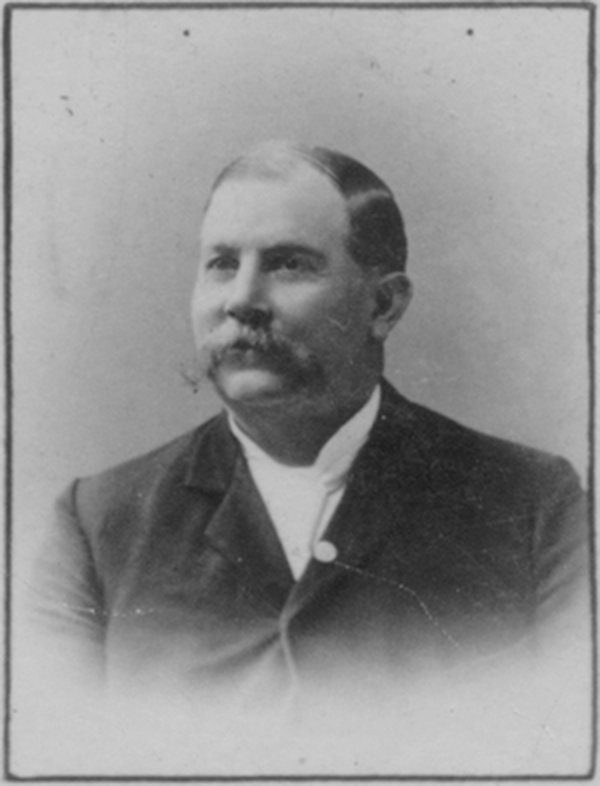 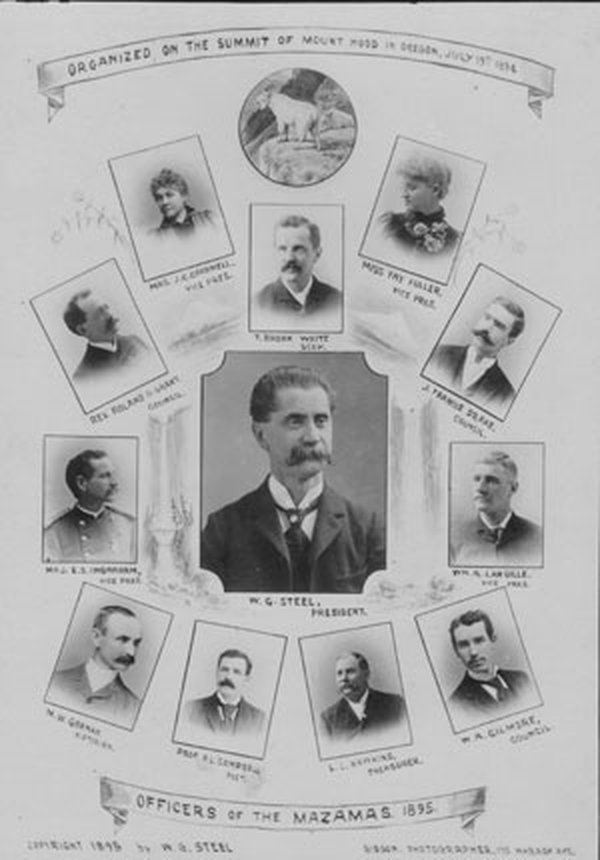 To paraphrase the original charter, the Mazamas set for themselves four goals:

Mazama conservation advocacy started early. In 1895 William Steel lobbied in Washington DC to prevent the development of the massive Cascade Range Forest Reserve (precursor to Willamette National Forest). The attempt, in 1902, to limit the destructive effects of extensive sheep grazing in the Northwest was another early Mazamas conservation effort. The public's interest in scientific exploration drove early mountaineering. It was almost unheard of for mountaineers to undertake a climb without a barometer, mapping instruments, or other scientific equipment. The Mazamas were no different, embracing scientific research from the get-go.

William Steel remarked, “No climb is complete without them” when asked about women and mountaineering. From the very beginning, the Mazamas have welcomed women as full members. At the time, this was uncommon. The Mazamas and Oregon were ahead of the times. Oregon adopted women's suffrage in 1912, followed nationally by the 19th amendment in 1920. A few dates: 1895, the organization's first two vice-presidents were women; 1917, first Mazama climb led by a woman; 1933, first all female climb; 1953, first female Mazama president. From the 1890s on, women hiked and climbed in the Pacific Northwest. While they were bound by the constraints of fashion on Main street, they found ingenious ways of getting around those rules on the mountain. 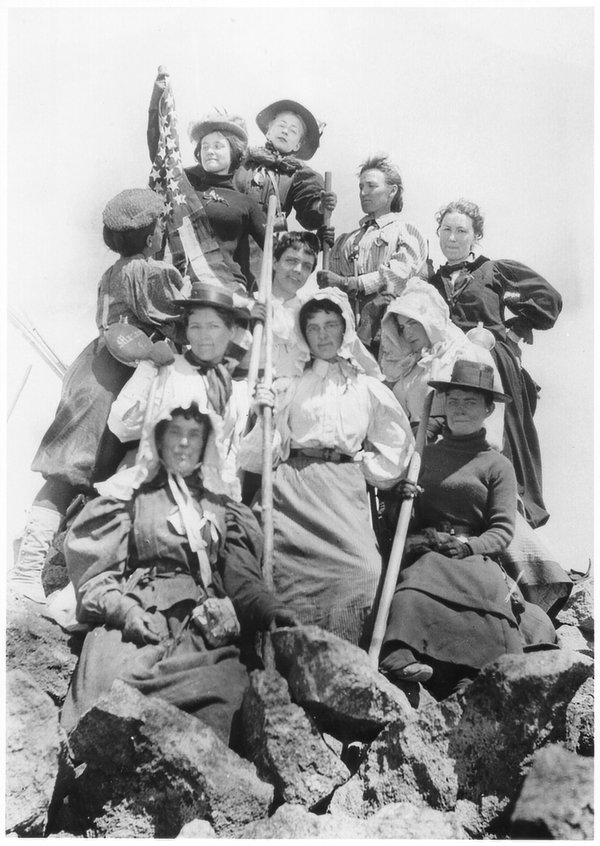 The Mazamas quickly took off. By the mid-1920s they were organizing and leading multi-week outings to peaks and passes throughout the Northwest, making a name for themselves while honing their technique.  Their conservation efforts continued as well. In 1928 the Mazamas entered a prolonged battle against the proposed Mt Hood Tramway from Cloud Cap Inn to the summit. Scientific research continued unabated. In the 1930s Mazama members were surveying glaciers on the principle peaks, noting the changes from year to year. They soon added airplanes to their research tools. Researchers today use the Mazamas early aerial photographs to study glacial changes. In 1932 the Mazamas were instrumental in the formation of the Federation of Western Outdoor Clubs. In 1947 the Mazamas formed a Conservation committee to confront threats posed to Washington's Olympic National Park. In the years since its formation, there has been a wide diversity of conservation campaigns, including advocacy against the development of a tourist tramway halfway up Mt. Rainier (1929), and for the creation of Forest Park (1947) and the Wilderness Act of 1964.

The Mazamas started their Climbing School in 1952. Classes were free and included members and local high schools students. In 1956 the Climbing Committee recruited high school teacher Bill Oberteuffer. His high standards, well-prepared lectures, and skill building field trips set the standard for years to come. The Intermediate Climbing School began in 1957 to detect and develop leadership. An advanced course joined the lineup in 1965. 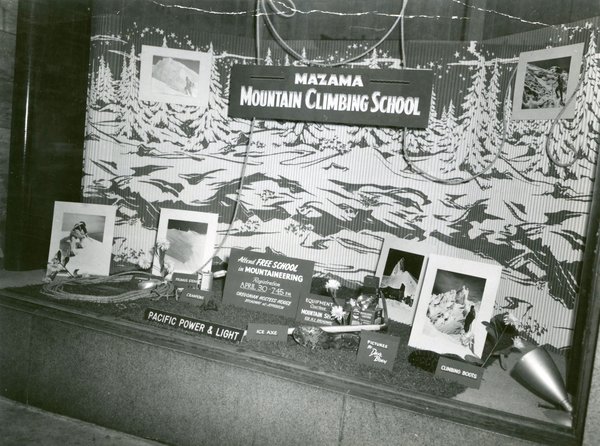 A home on Mount Hood

A history of the Mazamas would not be complete without mentioning our long-time home on Mount Hood. The first lodge, built in 1923, was on the Zigzag River near Twin Bridges. It was the Mazamas first home on the mountain until road maintenance improvements guaranteed the road over the pass remained open year round in the early 1930s. The Mazamas built a grand lodge at Government Camp in 1931. A fire destroyed the lodge, burning it to the ground in 1958.  The current lodge, constructed in 1960, serves as home base for many Mazamas activities. The 1960s and 1970s saw the Mazamas expanding into rock climbing in a big way. On January 1, 1960, three Mazamas made the first ascent of Monkey Face, a spire at the end of a dirt road in a then little-known place called Smith Rock. The Mazamas would go on to be instrumental in the popularization of Smith Rock as a climbing destination.

By the 1980s the Annual Outing had grown into multiple outings, across the region and around the globe. Small groups of Mazamas were now  climbing in the Alps, the Himalaya, the Andes, and many peaks between. And they were learning skills from the likes of Yvon Chouinard who demonstrated French techniques as part of a Mazamas ice climbing class. 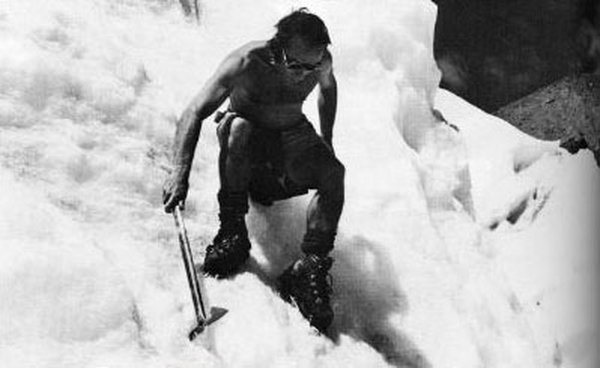 In 1994 the Mazamas celebrated their 100 Anniversary with a two-day celebration on Mount Hood that culminated with a climb to the summit. Several climbers embraced the past by climbing in turn-of-the-century costumes. The celebration ended with an impressive fireworks display from atop the mountain. 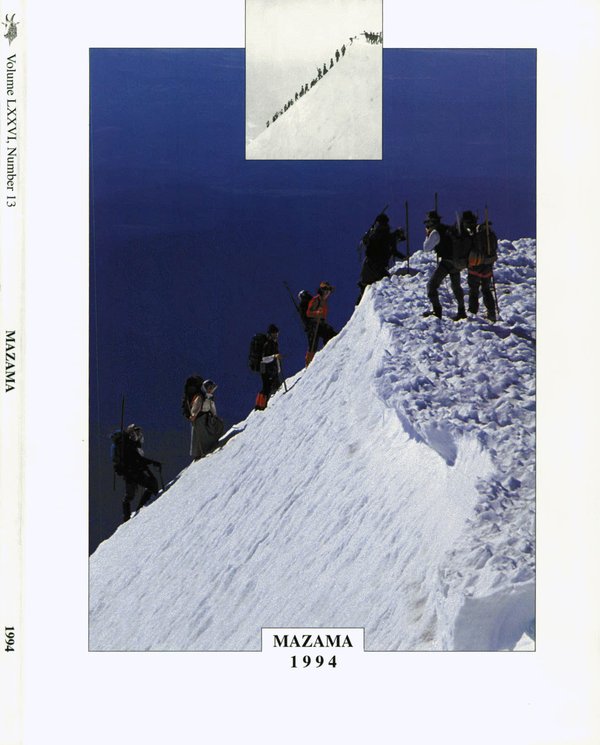 After 113 years of renting a series of lodgings around town, the Mazamas bought their first home in 2007. The Mazama Mountaineering Center provided a stable foundation for the growth the organization is experiencing today.

The Mazamas has evolved over the years.  From its industrialist roots with our founding fathers to morphing into more of a social club in the 1950s to becoming a modern-day 501(c)(3) non-profit organization that serves thousands of individuals.  While the group has grown over the years, it has remained faithful to William Steels guiding vision. Every year more and more people join the Mazamas to learn to be better climbers and find their community. The Mazamas continue to fund scientific research projects across a range of disciplines. And we continue to fight to preserve and protect the areas where we play. 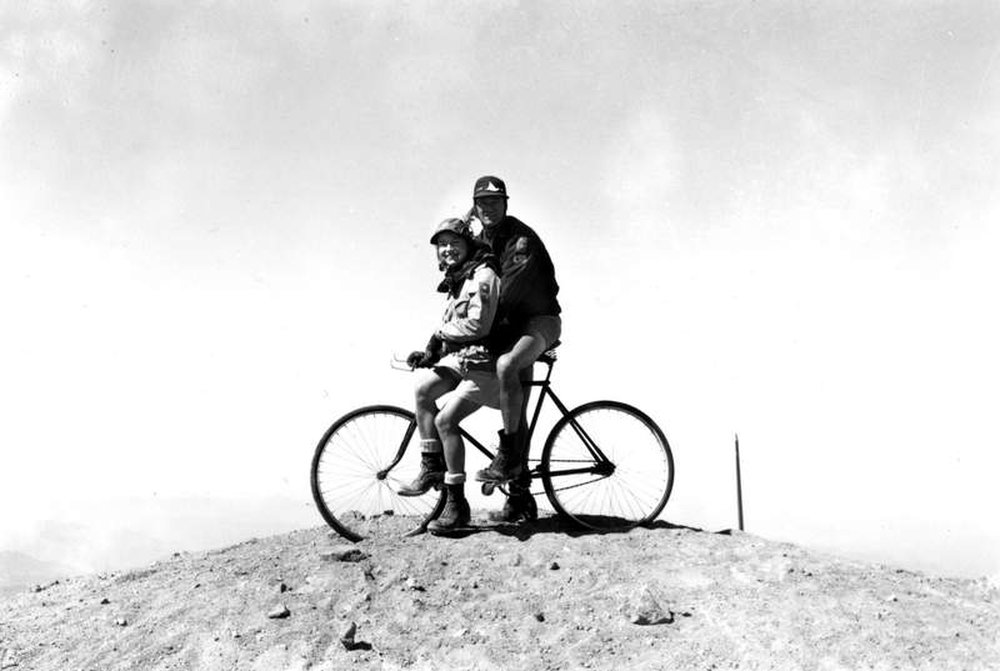