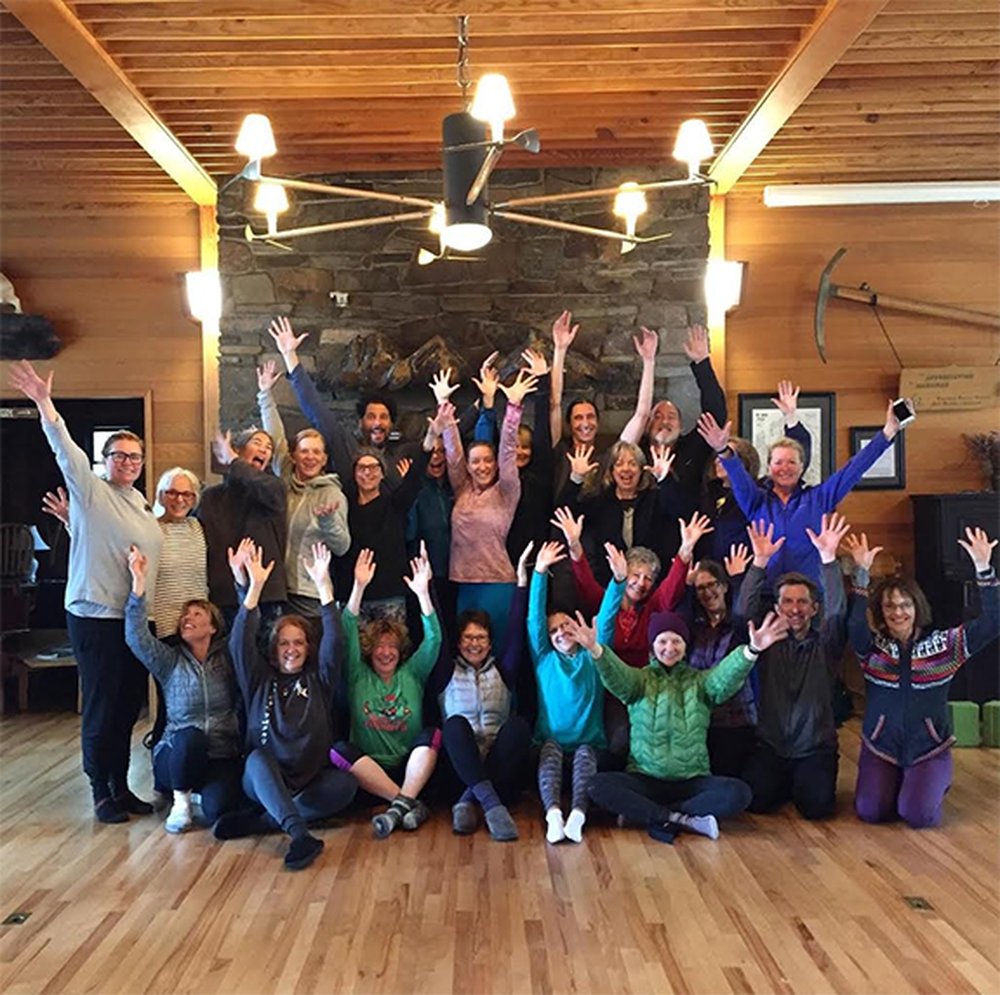 2017 Participants at the Lodge

The Mazama yoga retreat began about a decade ago and it has been strong ever since. During the retreat, we combine an in depth experience of active yoga with a chance to unwind from busy lives and have a truly restorative weekend.

During the first retreat, as we lay in savasana on the wood floor of the main room with the fireplace crackling, we could hear the pots and pans clanking in the kitchen. Rather than be annoyed, I coined the phrase that for me sums up the community, informality and restfulness of the weekend—"that's the sound of somebody else making dinner!"

The retreat is open to all, including those with no or minimal prior yoga experience. Expect an active weekend, downtime for hiking and reading and chatting, and lots of in person and hands on tuition to deepen your practice. Saturday night includes an optional sharing circle by the fire that for many has become an annual touchstone and support of where we are in the journey of our lives.

Eugene joined the Mazamas in 1988 and has participated at a variety of levels, both as a student, a volunteer, and a leader. As a climb leader, Eugene has led many climbs of northwest peaks and due to his dedication as a volunteer, he was nominated and won the Parker Cup in 2008. As an Outing leader, Eugene has led folks on adventures to places both in our backyard, such as the Wallowas, and across the world, like Tibet and Corsica. Eugene began the Yoga Retreat at the Mazama Lodge almost 10 years ago as a way to merge his passions for yoga and the outdoors and to create community.

Eugene has been teaching yoga for twenty years, using it both as a cross-training for physical performance and also as a doorway into spiritual practice. He currently teaches at OmBase Yoga in SW Portland, where he also offers his services as a Licensed Massage Therapist.

Monique Jacobs grew up in a family of runners, but never felt at home with her feet pounding the pavement. She knew there was an athlete in her, but it wasn't until she was introduced to yoga when she was in her 20s that she found her passion.

For the last 10 years yoga became a way to work through the stress of being a middle school math teacher, and it became even more important to her during her first pregnancy and birth of her daughter. Motherhood, though joyous, brought challenges including tendonitis of the hands, an ailment common to new mothers, as well as a rethinking of her identity brought about by leaving her teaching career. Monique was fortunate to participate in an immersion class which reminded her of how powerful yoga is for physical strengthening, as well as for providing a profound sense of calm within the chaos that accompanies motherhood and life in general.

This is Monique's second year joining the Lodge Yoga Retreat as an assistant instructor.

The retreat is open to all, including those with no or minimal prior yoga experience. Members and nonmembers alike are invited to attend.

How much does this retreat cost?

The cost for the retreat is $300. This includes your Lodge bunk and meals.

Private rooms at the Lodge are an additional fee.